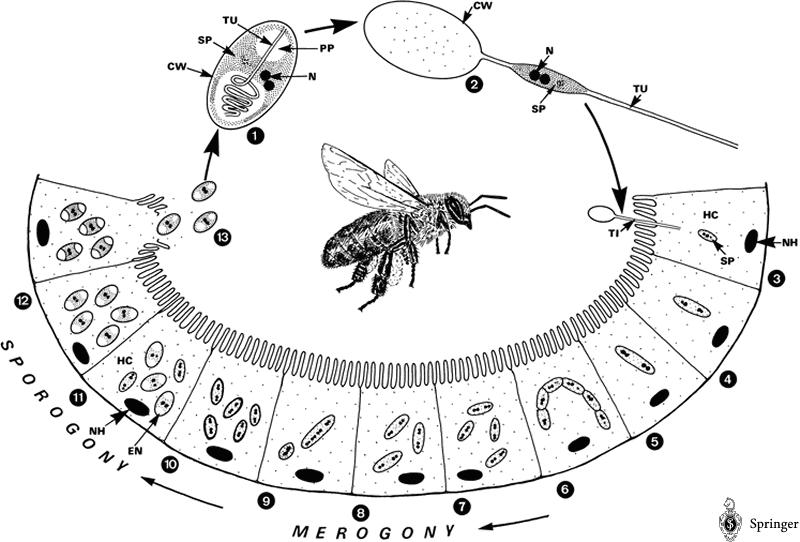 The European honey bee has a longtime association with the familiar midgut parasite Nosema apis. N. apis is a relatively benign parasite in warmer climes where bees can fly freely for cleansing flights during winter, and generally only becomes a problem where bees are restricted from such flights by long, cold winters.

Nosema spores spread by being ingested by foragers at water sources contaminated by bee droppings. Such older bees are short lived anyway, so the occasional infection is no big deal. Infected bees also tend to altruistically prevent spreading the infection by flying away and not returning to the hive. Kralj (2006)((Kralj J, S. Fuchs, J. Tautz (2006) Disease removal by altered flight behavior of forager honey bees (Apis mellifera) infested with Nosema apis. Proceedings of the Second European Conference of Apidology EurBee)) refers to this behavior as Ã¢â‚¬Å“suicidal pathogen removalÃ¢â‚¬Â.

Nosema becomes a problem, however, when newly-emerged bees ingest spores. When this happens, the infection messes up their ability to digest pollen, and thus keeps them from ever developing their hypopharyngeal glands. So how does a Ã¢â‚¬Å“house beeÃ¢â‚¬Â get infected? This happens when extended cold or rainy weather prevents cleansing flights. But when a beeÃ¢â‚¬â„¢s got dysentery from nosema she just canÃ¢â‚¬â„¢t hold it. The house bees then say Ã¢â‚¬Å“OhMyGod, somebodyÃ¢â‚¬â„¢s pooped in the hive!Ã¢â‚¬Â The insidious thing is that cleanup is a job delegated to newly emerged bees, who then ingest the spores in the process, and the infection thus moves from older bees to the very youngest. When this happens, nosema can go epidemic in the hive, with dire results. Infected queens can be superceded, and unless the newly-reared virgin replacement can fly, the colony will go queenless.

The photograph shows a colony that died out in January, with the queen in a tiny cluster surrounded by food. This had […]

Although Autumn is the traditional time for honey shows, preparations should begin much earlier in the year.